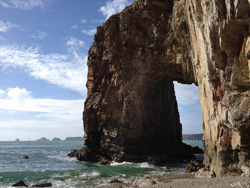 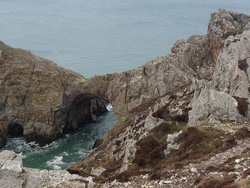 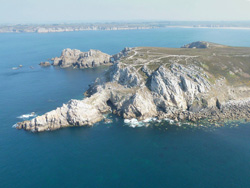 Dinan Point is a rocky spur overlooking the sea, it is referred to as the “Château de Dinan”. Indeed the weather-beaten rocky spur resembles a castle. One of the extremities of the point forms a sort of natural fortress and looks like a mediaeval dungeon in ruins with an arch resembling a draw bridge. Upon arriving at the rocky natural fortress, visitors have a magnificent panoramic view of the Bay of Dinan and further in the distance the Point of Pen-Hir and the Tas de pois.
From this point several hiking trails make it possible to visit the beautiful coastline all the way to Morgat or Camaret.
Back to previous page 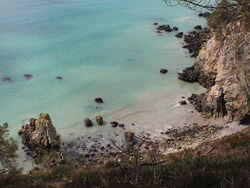 Over the years the seaside resort of Morgat, a former sardine fishing port nestled in the Bay of Douarnenez, has become a high spot of tourism in Brittany thanks to the many events organised on the quays of the port, on the beach and in the marina and because of its proximity with the Ile Vierge, one of the most beautiful spots on the Crozon Peninsula.

END_OF_DOCUMENT_TOKEN_TO_BE_REPLACED 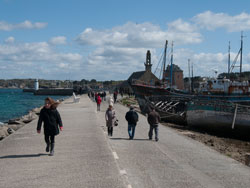 The Pointe de Pen Hir and the Tas de Pois, the Tour Vauban, the Pointe des Espagnols, and the beaches offering activities such as sailing, surfing, kayaking, kite flying, windsurfing, and canoeing, etc.